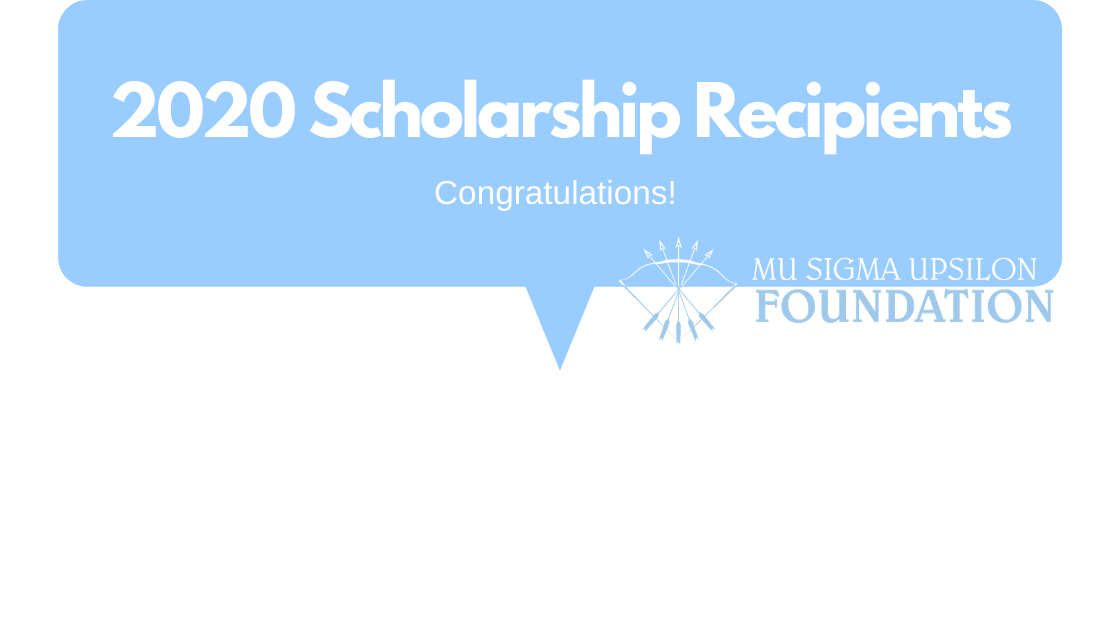 The Mu Sigma Upsilon Foundation offers scholarships to the sisters of Mu Sigma Upsilon as well as high school community leaders to help offset the cost of their college education. Our 2020 Scholarship Recipients were announced virtually via social media in June 2020. Congratulations to the following winners!

This scholarship distinguishes the contributions of late sister, Danielle N. Smith and her over 25 years of service to MSU making significant impacts nationally and locally. Danielle played an integral part in the establishment of the Aretias Graduate Chapter and she was a champion of higher education earning her Juris Doctor (J.D.) Degree. This scholarship is awarded to an Aretias sister who demonstrates academic excellence in graduate study. Nominee must qualify as a role model to her peers and exhibit traits worth emulating by other sisters in Mu Sigma Upsilon. This scholarship in the amount of $500 is funded by the Aretias Graduate Chapter of Mu Sigma Upsilon.

Ashley Brevil became a sister of MSU in 2008 at the Haumea chapter. She graduated from the University of Central Florida with a B.A. in Psychology, a B.A. in Social Work, as well as an M.A. in Social Work. Ashley is pursuing her goal of obtaining her doctoral degree in Public Affairs at the University of Central Florida with an expected graduation date of May 2023. She plans on engaging adolescents in dialogue about their future plans for their lives, painting pictures of their hopes and dreams, and encouraging them to pursue whatever they desire to the highest heights they can imagine. Within MSU, Ashley has been involved at the chapter, district, and national levels for 12 years. Most recently she has served on the National Governing Council as President. She is honored to be the second recipient of the Danielle N. Smith Aretias Graduate Scholarship because, similar to Danielle, she embodies the values of virtue and strength as a woman. Shirley Li, a recent graduate from SUNY Albany became a founding sister of the Arcus chapter of MSU in 2019. She obtained a B.A. in Human Development & Psychology. Shirley discovered her passion for helping students throughout their undergraduate career and aspires to work in the higher education field. She wants to become a role model for students and bring different communities together for greater change. With hopes to continue her academic career, Shirley plans on a future career as Director for Student Affairs in Higher Education.

Jazmine Washington became a sister of MSU at the Genesis chapter in 2017. She graduated from Kutztown University with a B.S.W. while majoring in Social Work with a minor in Women, Gender, and Sexuality Studies.  Since becoming a sister, she has served various positions on the chapter level. Her passion in social work comes from helping people find resources. She aspires to uplift her community by helping people cope and solve problems. Jazmine wants to further her studies in Graduate school. She anticipates working to understand and develop ways to overcome essential topics such as racism and intersecting oppressions based on gender, class, sexual orientation, identity, ability, and other social factors.

Nyesha White became a sister of MSU in 2016. She graduated from Rowan University with a B.A. of Science in Biochemistry. Nyesha is currently attending Rowan University’s School of Osteopathic Medicine and is expected to graduate in May 2020. Since becoming a sister, she has served on the chapter, district and national levels. She has connected with and supported sisters at all levels, while persistently learning how to be a better resource and empower our future leaders. Nyesha has recently served on the National Governing council as Vice President. She aspires to train and positively impact lives as a physician. Alzando is the Spanish verb for the act of uplifting. The Alzando Scholarship is awarded to individuals working to positively lift up their campus communities. The Scholarship is open to any full-time collegiate individual identifying as female attending University of Central Florida. Applicant must be in their 1st or 2nd year of post-secondary education, have maintained a minimum grade point average of 3.0, and have demonstrated campus and/or community involvement.

Jasmine Rahman became a sister of MSU at the Haumea chapter in 2018. She is studying neuropsychology at the University of Central Florida with an anticipated graduation date of 2021. She has served various roles on the chapter level. Her goal is to become a neurosurgeon and resolve the puzzling mysteries of the brain. One day, she hopes to open her own practice, along with a dance studio as dancing is one of her passions. Determined, Jasmine will never let one goal be her last.

Anyeli Galvez is a high school senior in Patterson, NJ at the School Of Business, Technology, Marketing and Finance. She saw an opportunity to form part of  a school-based organization, Distributive Educational Clubs of America, in which she completed her project, “The John F. Kennedy Clean Water Campaign.” Anyeli developed this campaign aimed to provide free cups of water to students at her high school. In February of 2019, the students at John F. Kennedy high school had clean water to drink. Every lunch period a cup of water was provided to students upon request in the school store. Anyeli’s experience with the Clean Water Campaign has motivated her to give back to her community. She aspires to have a career in business, in addition to returning to Patterson to install water fountains that dispense clean and healthy water for members of Paterson Public Schools.