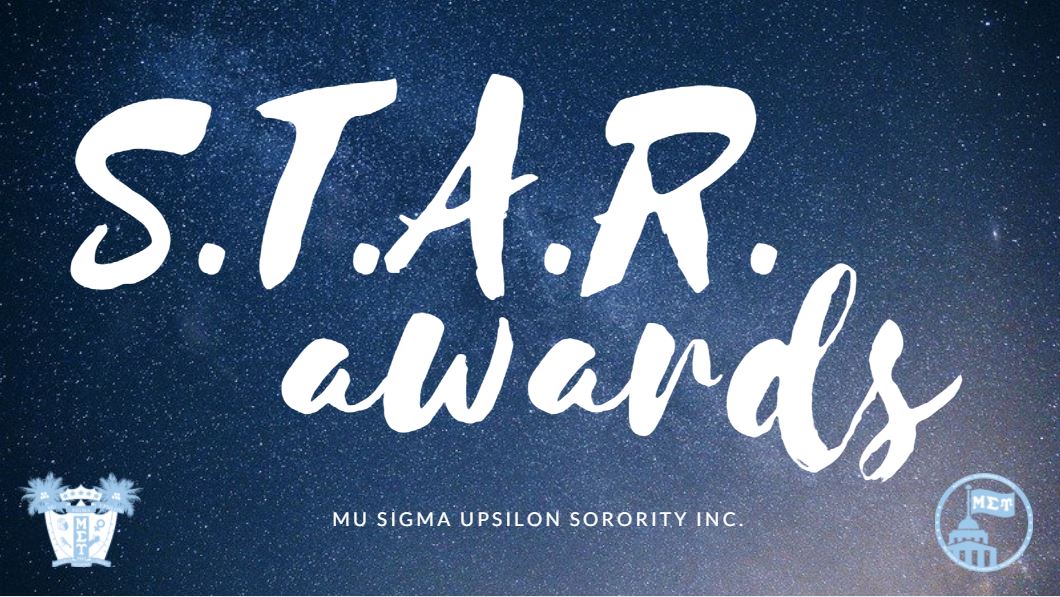 by Tashanna WilliamsPosted on June 20, 2018June 20, 2018
Posted in FeaturedModern Amazons

On June 9, 2018 Mu Sigma Upsilon Sorority, Inc. honored the following sisters and chapters for their accomplishments during the 2017 calendar year. Congratulations on all of your hard work and dedication to MSU and your surrounding communities!

Achieving and maintaining excellence is not easy. A Stellar Award is presented to a collegiate sister who has sustained the highest level of academic performance above and beyond the prerequisites required by the National Governing Council. Congratulations to Taj-Aya Barnes, Atitlan Chapter, Fall 2017 for achieving a cumulative GPA of 3.9!

Deciding to continue with your education and enrolling in a master’s program can be one of the best decisions a person can make. For that reason, the Aretias Achievement in Academia Award is presented to an Aretias sister who has sustained highest level of academic performance above and beyond the prerequisites required by the National Governing Council. Congratulations to Jessenia Garcia, Lazuline Chapter, Spring 2011 for achieving a cumulative GPA of 4.0!

E.M.E.R.G.E.: Empowering Mus to Engage, Revive, Grow & Educate. E.M.E.R.G.E. is a way for NGC to identify and develop the future leaders of our organization. The NGC Internship is a chance for members to learn about the behind-the-scenes daily operations of NGC and an opportunity to gain experience for those undergraduates interested in eventually serving as a national officer. The recipients of the E.M.E.R.G.E. Book Scholarships are: Brianna Jolley, Uthaulia Chapter,  Jasmyne Watkins, Dhyani Chapter, and Yanelis Martinez, Themiskyra Chapter!

A nova is a star that suddenly increases in brightness by several magnitudes. This award honors the achievements of a distinguished collegiate sister who has personified the ideals of Mu Sigma Upsilon. Congratulations to Yanelis Martinez, Themiskyra Chapter, Fall 2016!

A supernova is an explosion that releases a tremendous amount of energy expelling the outer layers of the star and becomes extremely bright. This award honors the achievements of a distinguished Aretias sister who has personified the ideals of a Mu Sigma Upsilon. Congratulations to Soltier Guillen, Nysa Chapter, Fall 2012!

Yuiza (yoo-ee-zuh), the only female Taino Cacique (chief) in Puerto Rico’s history, was a legend and a hero who was greatly admired by her people. This award honors a sister who has been chosen to hold the title of Chapter Officer of Membership and has exceeded in her role to guide prospective members as they enter our sisterhood. Congratulations to Christina Fuentes, Rhea Chapter, Spring 2010! Starija Sestra (starh-ee-ya ses-truh) translates to older sister in the croatian language. The Starija Sestra of the year recognizes a sister who has played an exemplary role as a big sister of a prospective member during the orientation process. Congratulations to Vanessa Luna-Rivera, Siksika Chapter, Fall 2011!

The star known as Polaris is the North Star and is commonly known as the guiding star. This award recognizes a sister who has excelled in her career and is considered a trailblazer, providing new paths for the next generation of female leaders. She is a prime example of a woman of power and influence in the professional world.  Congratulations to Dagersy Jacquez Cedano, Themiskyra Chapter, Spring 2006!

The Star of Mu Award, established in 1997, is a lifetime achievement award. The hallmark of each recipient is a sterling record of notable career accomplishments, complemented by a history of exceptional contributions to MSU. It honors an Aretias sister who has brought honor and distinction to MSU by making significant offerings to our organization and the community. Congratulations to Jennifer Rencher, Siksika Chapter, Spring 2000! R.A.C.E. stands for recognizing and celebrating ethnicities. This award honors a chapter who upholds MSU’s foundation of multicultural ideals and has hosted an original and impactful program highlighting a cultural or diverse topic. Congratulations to the Themiskyra Chapter at SUNY Old Westbury for hosting R.A.C.E.! Mujeres Siempre Unidas, spanish for women always united, pays homage to our founding mothers as MSU’s national motto.  This award honors a chapter who has upheld MSU’s goal of Unity Amongst All Women and has hosted an innovative and insightful program focused on educating others about an issue currently affecting women. Congratulations to the Indigena Chapter at New Jersey City University for hosting Afro Who, a panel discussion consisting of topics such as African roots, cultural identity, denial of one’s own race, skin bleaching, and truly embracing the unique aspects of each individual.

Astrum is Latin for ‘constellation’. A constellation is a group of stars forming a recognizable pattern that is traditionally named after its form. This award is presented to a District and identifies it as the district of the year based on the discretion of NGC and their interactions with their District counterparts. Congratulations to the District VII Executive Board! Serviam is Latin for “I will serve.” The Serviam Award recognizes an undergraduate chapter who has given of themselves in support of the school where the chapter is established and or community at large. Once awarded the chapter will select a philanthropy of choice or charitable cause and the NGC will donate $50 on their behalf. This award is based on community service hours and donations towards local or national philanthropies. This chapter completed 178 hours of community service and donated over $300 to various philanthropies in 2017. Congratulations to the Matriarca Chapter at Montclair State University!

A Rising Star is presented to a chapter that has been established a minimum of two years and has made significant strides within the past one or two years. Essentially, it is a chapter that is up-and-coming. It has improved their chapter status by instilling the three goals and ideals of Mu Sigma Upsilon. This chapter received a 5 STAR rating and completed 131 hours of community service and donated $150 to various philanthropies in 2017. They achieved an average chapter GPA of 3.3 and hosted 7 women’s and cultural issues topic programs. Congratulations to the Palenque Chapter at Bloomsburg University!

Luminosity is a total brightness of a huge group of stars bound together through gravitational forces. The efforts of each chapter are important elements to the success of Mu Sigma Upsilon at both local and national levels. This award is the most esteemed accolade presented to a Chapter and identifies it as the chapter of the year. It recognizes a Chapter that has exemplified and cultivated an exceptional relationship within Mu Sigma Upsilon, school and the community at large. This chapter received a 5 STAR rating and achieved the highest overall STAR Report score for Spring and Fall 2017. They completed 115 hours of community service and donated $130 to various philanthropies in 2017. They achieved an average chapter GPA of 3.02 and hosted 5 women’s and cultural issues topic programs. Congratulations to the Indigena Chapter at New Jersey City University!