Home
/
Culturally Speaking
/
My Culture? Not a Costume. 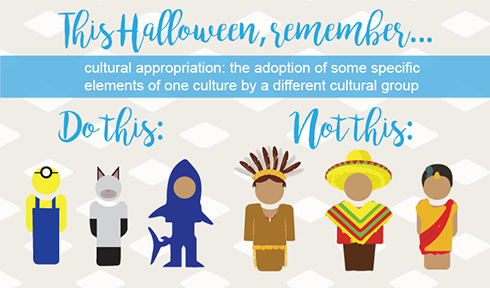 by Djenne DickensPosted on October 9, 2017October 12, 2017
Posted in Culturally Speaking

What I’m talking about here is culture. Cultures–people’s skin color, hair, belief structure, traditions–cultures can’t be taken off and put back on in a day-to-day fashion, unlike costumes. It is incredibly offensive to see Halloween costumes that try to portray the wearer as a certain race or ethnicity. Why? Because it boxes entire groups of people into racial and ethnic stereotypes in addition to reducing entire cultures to simple caricatures.

I’m talking about blackface. Dressing like a geisha. Mexican donkey costumes. Dressing in such a way limits people of these cultures to a single story, rather than acknowledging the rich and diverse experiences people from each heritage face–as humans. It’s one thing to dress up as fictional superheroes like Wonder Woman, but to conflate the broad diversity of a culture into a single costume underlies the (incorrect, but prevalent) belief that all groups of people are not equal. How can we promote equity amongst all if that is our underlying belief?

As Halloween approaches, I must stress that this issue is another case of intent versus impact. A person may go into a store with innocent intentions, just planning on grabbing a costume that will make friends laugh. But not everyone will be laughing if this person shows up as a Native American wearing an elaborate head dress. Wearing a tradition that is carefully passed down and cherished from generation to generation simply because it looks cool IS offensive. It might not be offensive to you, but part of helping your community thrive is being mindful of the needs of the other members of your community.

We are a beautiful community filled with dozens of rich cultures, traditions, and histories. Let’s celebrate them, not degrade them. Happy costume shopping!